Wish I had gotten around to writing this blog post sooner! I had to go back to a few notes that I quickly jotted down. The beer has really developed since my first taste test and I've gotten many compliments from friends and family (even though they're probably just lying to make me feel better about myself). But, I digress... 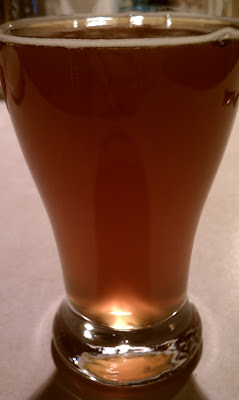 Now that a few weeks have past, the beer has really come into itself. It has continued to clear, carbonation is smooth, and the flavor is less dry (but also less hoppy). It is best served moderately chilled.

I really want to brew a hoppy beer that combines the strength of the hops, but also sweetness and is full-bodied. I guess the dream is to be able to brew something like Two Brothers' Hop Juice. Now THAT'S a fantastic beer! Someday... maybe.
Posted by KraemerBrew at 9:03 PM