Update: “Kraemer is paler than you” American Pale Ale [Bottled] 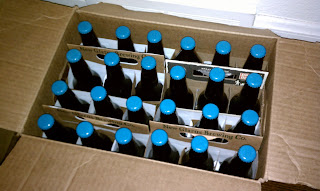 Decided to bottle after two days of little to no sign of fermentation. Very curious to see how this beer will taste, especially given how bitter and largely un-sweet the wort initially tasted. (To be honest, I was more than a little worried that this beer would turn out too bitter and too dry.) The beer has darkened considerably, and cleared slightly.

Just a few quick notes on the fermentation process: Since first brewing, I decided to keep the fermentor upstairs given how cold our basement has gotten since mid-November. I wanted to be sure that the temperature stayed above 65 'F at the very least. During the winter, it may not be possible for me to store fermenting beer in the basement. Instead, I kept it covered and in our back room -- the warmest room in the house (~68 'F). This was also the first time I decided to make use of a blow-off hose (instead of just attaching the fermentation lock at the outset). I fit one end of the hose into the carboy's opening and the other in a small jar of water. This basically created a large lock. After a day or two I attached the official lock. Don't think this will have much of an impact, but it was nice to not worry about an overflow clogging the lock.

To say that I was impatient with getting this batch of beer brewed and bottled would be an understatement. I don't know why, but I felt a general sense of urgency. I guess I'm just eager to brew! I'm a perfectionist by nature, but I do like to dive in head first and figure things out as I go. In any case, I think it's better to brew with love and patience. Jenny, my partner in crime, was feeling a bit under-the-weather and wanted to wait another day to bottle. But (again, being impatient) I decided to forge ahead, and bottle alone. MISTAKE! Bottling is definitely a two person job. Ever try getting the auto siphon going with one hand (the other holding a half-full bottle of beer, hose, and bottling stem)? Don't. It blows. I had a hell of a time getting it going and keeping it going. Jenny, who was a very good sport about the whole ordeal, had to help. She wasn't pleased. (Sorry, Babe!)

I sanitized my secondary fermentor, bottles, caps, auto siphon, hose, funnel, etc in One-Step Sanitizer. (1 T per 1 gal of water). This is a drawn-out process with 48+ bottles to sanitize plus equipment. Is there a quicker way? Perhaps I should just clean all bottles BEFORE beginning bottling. Maybe next time.

I got the priming sugar ready (1 ¼ c Briess Dried Malt Extract boiled in 16 oz water for 5 min) and added it to about 1 gal of beer siphoned from my primary fermentor to my secondary fermentor before siphoning the rest. I do this to cushion the glass from the boiling hot liquid, while getting a decent mix of the priming sugar with beer for bottling.

From there it was just a matter of filling each bottle while Jenny capped. Siphoning took FOREVER. It only took 2.5 hours; which is about 1.5 hours longer than it should have taken. I'm not sure why it was so difficult. Density of liquid? Not only that, but because we had to keep pumping the siphon, it created a fair amount of air bubbles throughout the process. I'm hoping this doesn't mess with the carbonation of the beers. It made me want to go out and get a bucket with nozzle to just twist on and off to fill each bottle. Xmas gift?

I was able to actually try the beer before bottling. I'm happy to report that I'm expecting a delightful American Pale Ale. At least it tastes like an APA! First impressions:


Specific gravity = 1.018
[Note on measuring specific gravity: I'm not getting proper readings. The initial gravity (before pitching) and final gravity nearly identical. Tasting the beer; however, the alcohol content is definitely there. Will have to do some additional research to see what I'm doing wrong.]

Overall, a seemingly successful (if somewhat stressful) brew. Can't wait to try it! Just 10 more days.
Posted by KraemerBrew at 9:13 PM No comments:

“Kraemer is paler than you” American Pale Ale 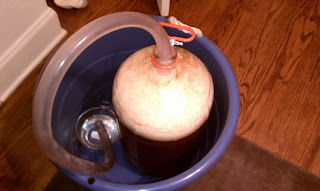 Hallelujah! The blog is now up-to-date! The past posts outlined my brewing experience up to this point. As you can plainly see, I'm still very much new to beer-making. From now on, I'll try to add more pictures and list impressions, tips, and experiences AS THEY HAPPEN. Now on to the latest brew...

(Before adding yeast) Beer a hazy deep marigold color; strong hop scent; tastes bitter with a dry citrus hop flavor. Expect this beer to be strong and hoppy. Not sure how much sweetness will be there after bottling.

I was hoping for something like a cross between the strength of an IPA and the body and flavor of an APA. However, I sort of rushed the final planning. Therefore, I'm not sure what to expect. The light malt extract syrup and Munich malt seem to have given the beer a lighter hue and drier flavor. I'm concerned I should have gotten a crystal malt for sweetness. Just have to wait and see now.

Posted by KraemerBrew at 10:27 PM No comments: 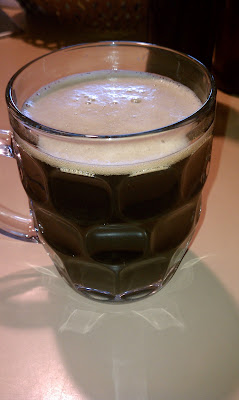 Taste: Coffee, bitter chocolate, more like a stout than a brown ale. Very excited about this beer from first taste!
Posted by KraemerBrew at 9:21 PM No comments:

Since this blog is coming a few months after my first and second batches of beer, I'd better get you up-to-date. Here's an account of my first foray into brewing beer!

Basement temp: 74 'F, 63% humidity.
Recipe from the Wine and Hop Shop
Posted by KraemerBrew at 9:17 PM No comments:

Brewing beer (and a blog)

Two things I'd never done, but always wanted to do: brew beer AND start a blog.
After a few years of wanting to try my hand at homebrewing, I finally pulled the trigger this past June: I bought a kit and immediately dived in. So far, the experience has been intoxicating. (Don't worry, I already hate myself for the pun.) After two batches, I'm now planning my third. Then, in the process of jotting down ingredients and formulating a recipe, it hit me: Why not start a blog about homebrewing?! Posting online would be an easy (and fun?) way to track my progress and store what I've learned.
So here I am; brewing beer and blog. I'll post my experience: Recipes, tips, and more; and hopefully have some fun along the way.
Cheers.
Posted by KraemerBrew at 9:33 PM No comments: